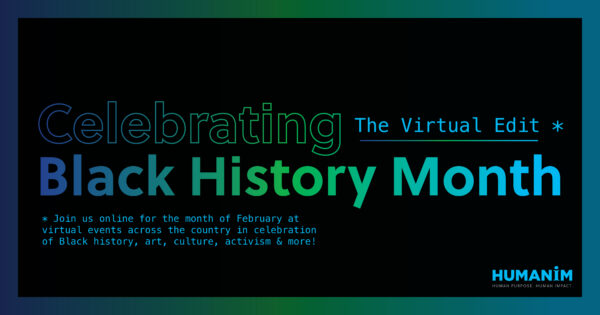 Join Humanim online for the month of February at virtual events across the country in celebration of Black history, art, culture, activism & more!

View/download our interactive flyer to learn more & easily register for upcoming events, or use the links listed below.

A Seat At The Table: Prison Reform And Restorative Justice

From the Continent to the Americas: Foodways, Culture and Traditions in the African
American Family

How African American Families Have Been Portrayed in the Media

A Conversation about the Life and Legacy of Elijah Cummings with Dr. Maya Rockeymoore
Cummings, James Dale, and Dr. Freeman Hrabowski

Lunch and Learn: Historical Representation in the Maryland State House

Hair Love: Building a Legacy Through Representation with Matthew A. Cherry

Historically Speaking: The Economic Impact Of COVID-19 On The African American
Community

Diving with a Purpose: Recovering and Reexamining Our Roots

2/24 | 6:30 pm
Association for the Study of African American Life and History

The Life of Harriet Tubman

Dr. Charlene Dukes on the Black Family and Education

Photos from the Civil Rights Movement
High Museum of Art

The High Museum of Art holds one of the most significant collections of photographs of the Civil Rights Movement. The works in this exhibition are only a small selection of the collection, which includes more than 300 photographs that document the social protest movement, from Rosa Parks’s arrest to the Freedom Rides to the tumultuous demonstrations of the late 1960s. The city of Atlanta—the birthplace of Dr. Martin Luther King, Jr.—was a hub of civil rights activism and it figures prominently in the collection.

An Exploration of James Baldwin’s Life and Works Through the Powerful Lens of His House “Chez Baldwin” in St. Paul de Vence, France

Rosa Parks: In Her Own Words showcases rarely seen materials that offer an intimate view of Rosa Parks and documents her life and activism—creating a rich opportunity for viewers to discover new dimensions to their understanding of this seminal figure.

The Museum of Fine Arts, Boston, has one of the most significant collections of works by African American artists in the nation, and many acquisitions were made possible by the MFA’s Heritage Fund for a Diverse Collection. Click through for a chronological survey of the collection.

From 1954 through 1956, while the civil rights movement was unfolding right before him, the late artist Jacob Lawrence created a series of paintings called “Struggle: From the History of the American People.”

Join a Zoom Salon to discuss the film of the week. The featured weekly films starting on Feb. 5 are:

Register for each week’s sessions at milibrary.org/events/cinemalit-film-series