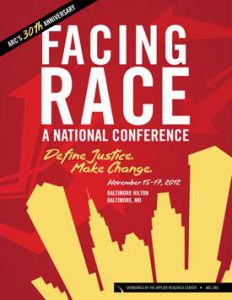 Humanim’s Chief Development Officer, Cindy Plavier-Truitt, presented on behalf of Baltimore Racial Justice Action (BRJA) on a panel organized by SURJ (Showing Up for Racial Justice). The Facing Race Conference is the largest national, multi-racial gathering of leaders, educators, journalists, artists, and activists for racial justice. The conference took place right here in Baltimore and ran from November 15-17. All of the attendees were able to share their knowledge on advocating for racial justice in all walks of life.

The topic of the panel Cindy spoke on was titled Strategies for Engaging White People in Racial Justice. She was able to share her experience for recruiting and engaging white people in racial justice efforts and working in alliance with organizations of color. Other conference sessions addressed topics such as the 2012 election, economy, arts and culture, LGBTIQ & sexuality, education reform, multiracial organizing, immigrant rights, and the development of racial justice leadership and training models. A PDF of the full program of the Facing Race 2012 Conference can be viewed/downloaded HERE.